In the battle of the sprints here at Round 9 of the Yamaha Australian Off-Road Championship (AORC) at Kingston SE, South Australia it would be Daniel Milner (E3), Daniel Sanders (E2), Fraser Higlett (E1) and Michael Driscoll (EJ) taking the victories.

E3
The E3 class was once again the Milner show aboard his KTM, despite putting his bike down in the first test, he composed himself and got back to his usual speed, taking the win with a time of 54:29.417.

Milner was made to earn the win here today with the tough conditions; “My first run today I pushed too hard into the corner and tucked the front end and lost a bit of time there. There was a log section that had us all struggling and I was definitely struggling with it but once I sussed out a line I managed to overcome the logs. The track was awesome it was rough, technical, hard and something we haven’t seen in AORC in a long time, credit to AORC for not taking it out and letting us battle through,” finished Milner.

Backing up his second place in yesterdays sprint it was once again the Husqvarna rider in Lachlan Stanford, who pushed through the conditions to record a 58:46.646.

Taking the final spot on the podium and showing great improvement from yesterdays results was Thomas Mason. The KTM rider made some slight adjustments today and they payed off for him, with a time of 1:00:05.087. 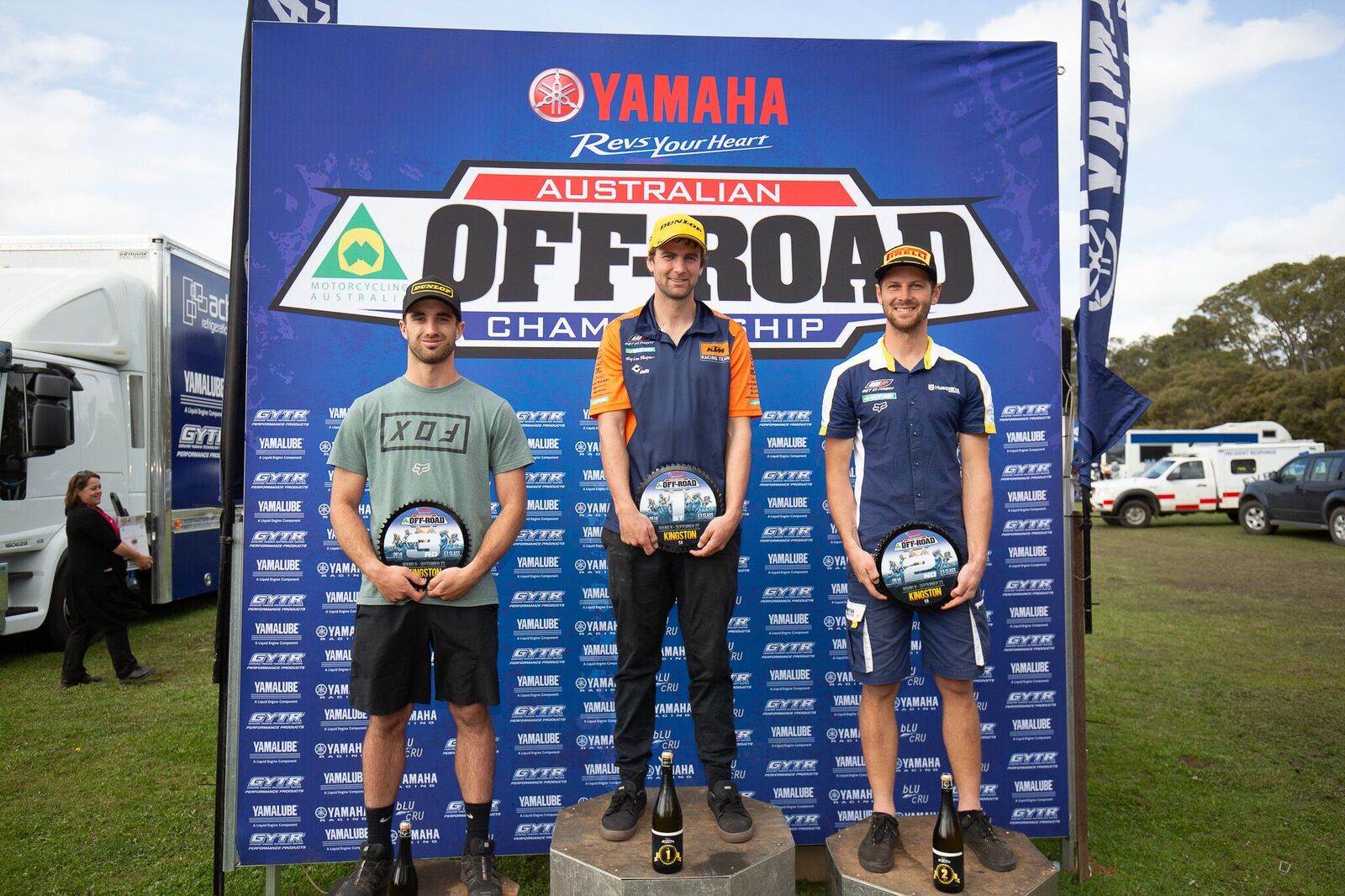 E2
Daniel Sanders has continued his stellar season, taking his ninth win in as many starts since returning from Enduro GP. Sanders found a way to navigate around the tricky conditions that took a toll on the rider’s fitness, but the Husqvarna rider stayed consistent to register a 54:58.946.

Sanders was happy to take the win but will look to improve at the final round; “The track was pretty rough today but I got off to a good start, but a few mistakes and crashes set me back from the times I was after today. All in all it was a good weekend for us and the team did really well to adapt to the conditions and help me achieve the win,” said Sanders. 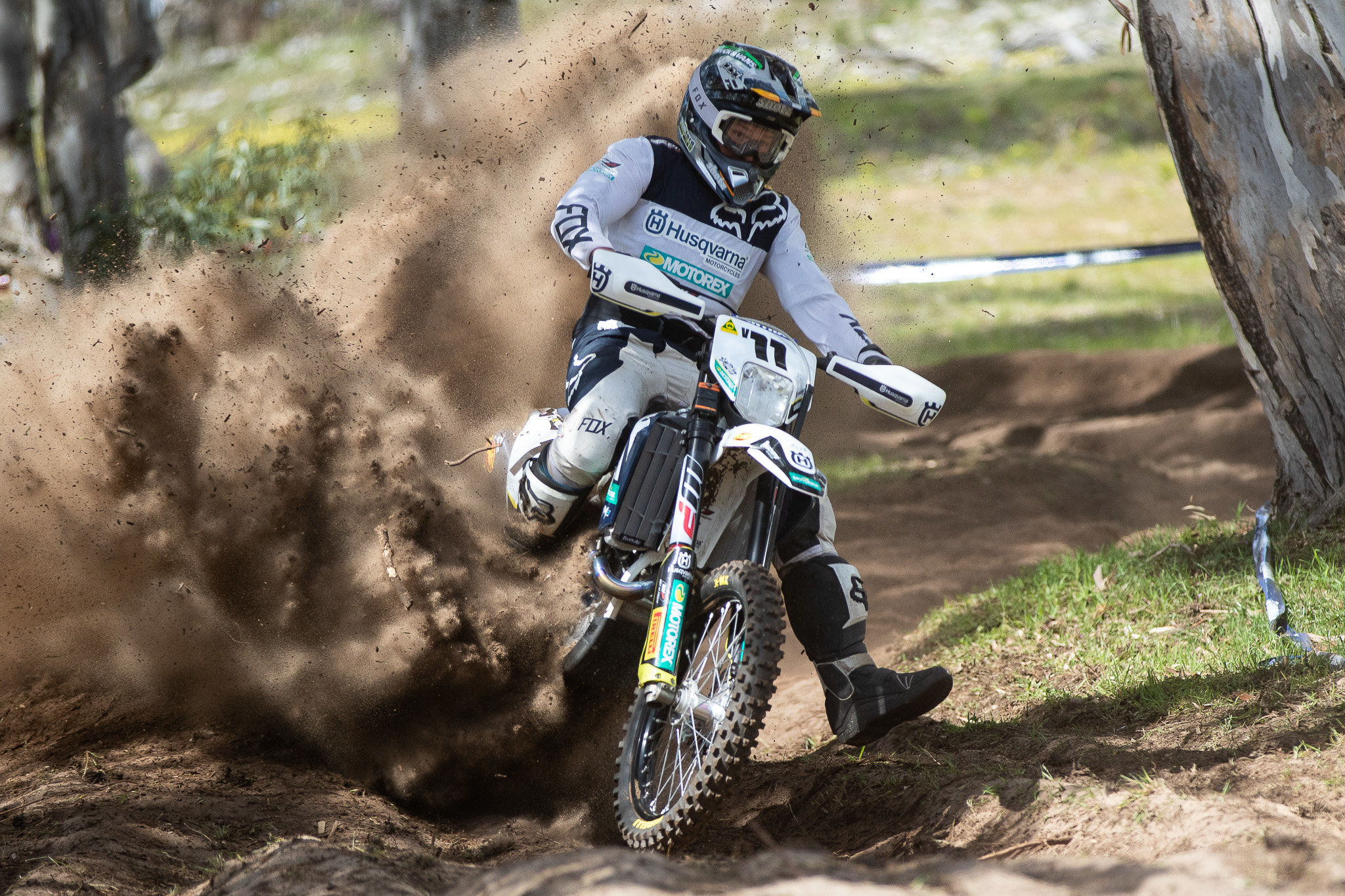 After missing the podium yesterday, Joshua Green bounced back here today to grab second place on his Yamaha with a time of 55:54.471. Green is one of the smoother riders in AORC and today it showed as the track became rough and he still looked cool and calm out there.

Lyndon Snodgrass made it a pair of third place finishes here at Kingston SE, as the KTM rider ended the day with a time of 56:46.015. Snodgrass leaves Kinston SE in second place in the E2 championship race. 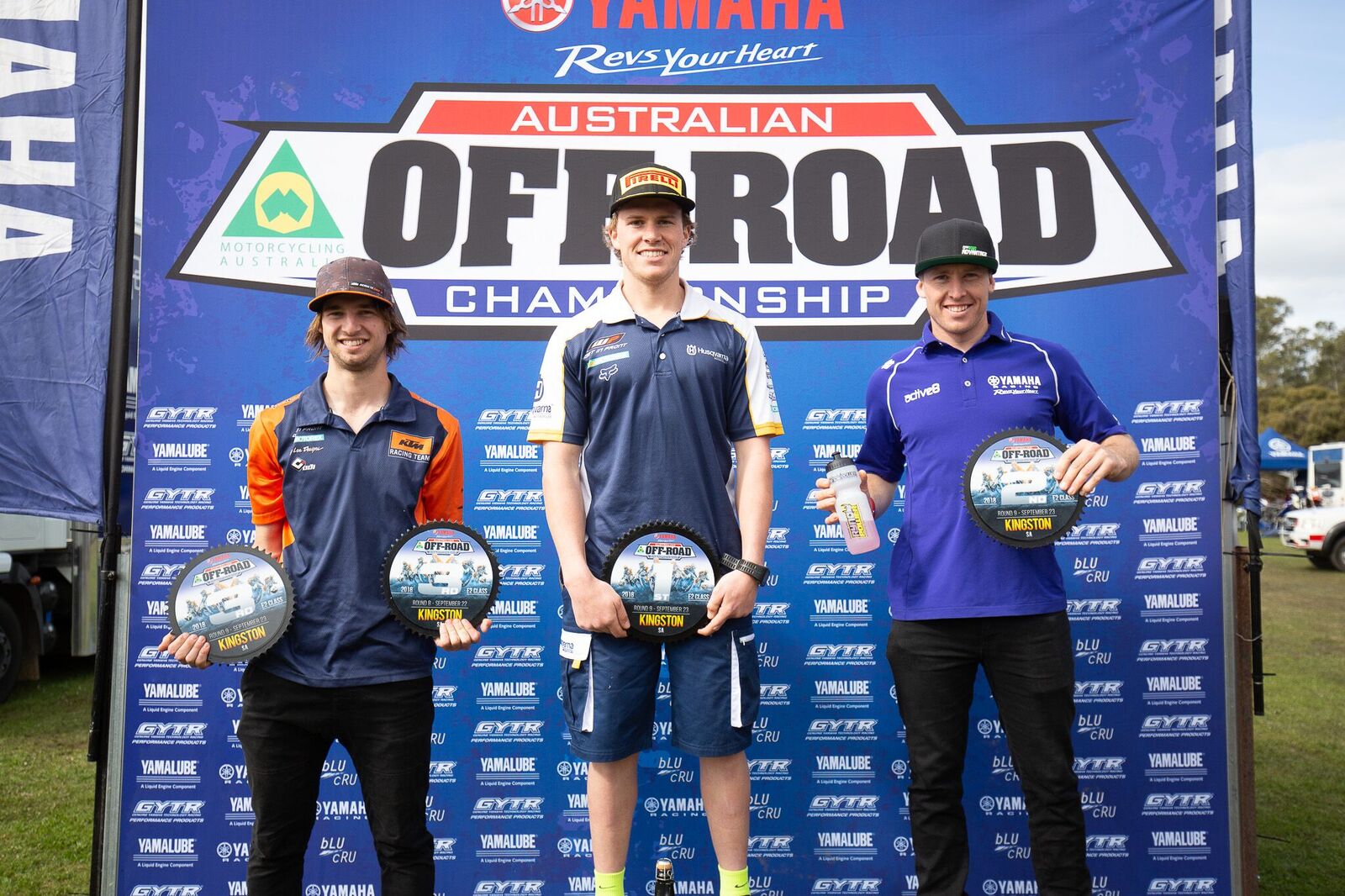 E1
After a second-place finish on the Saturday, Higlett has turned the tables to record his second race win of the season in the E1 class aboard his Husqvarna. Higlett has been known to enjoy the dusty and rough conditions and today was no exception as he stopped the clock at 58:30.922. 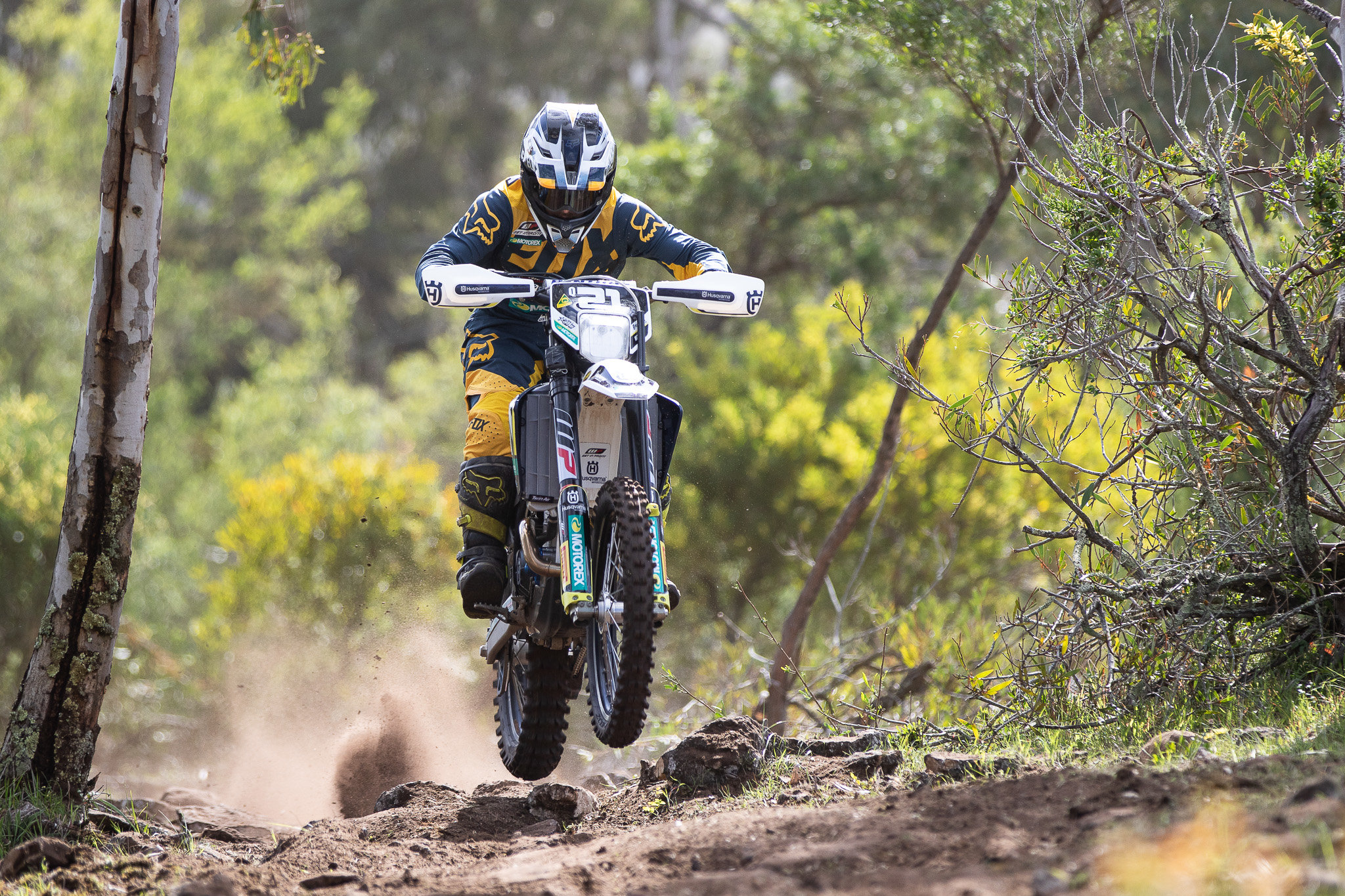 Frenchman Jeremy Carpentier grabbed his best finish down under, claiming second position to cap off a solid rounds riding with his third place on Saturday. The best result also comes on his 25th birthday, not a bad birthday present for the Yamaha rider.

Jack Simpson missed the previous round at Broken Hill, but he bounced straight back upon his return this weekend to snare the last spot on the podium. Simpson recorded a 1:01:07.670 to show he has found the speed again on return.

Luke Styke received a five minute penalty for deviating off the course, pushing him to fourth position with a time of 1:02.14.246.

EJ
The rider who continues to dominate the EJ class is defending champion Driscoll, who battled the rough and technical test here at Kingston SE to register his ninth win of the season. The Yamaha rider stopped the clock at 57:24.799. 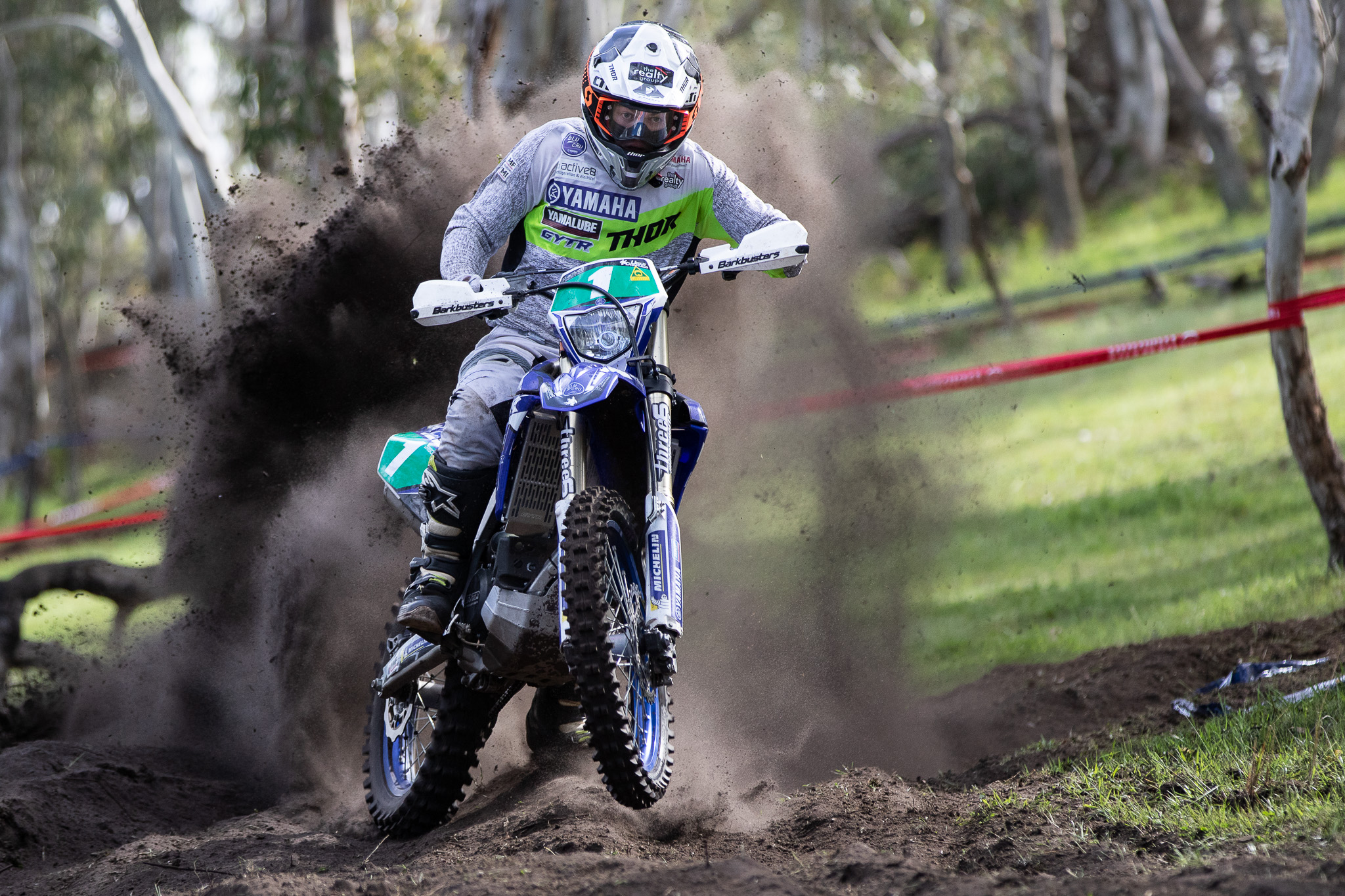 What a ride it was from Callum Norton, yesterday was his first go at AORC and today he has leaped into second position. Norton normally competes in the motocross format and was riding a Husqvarna in MX Nationals this season, but he jumped on a KTM and tried off-road and he adapted well, collecting a time of 57:51.715.

The podium was rounded out by Joshua Brierley to back up his second place yesterday, his time of 1:01:12.612. 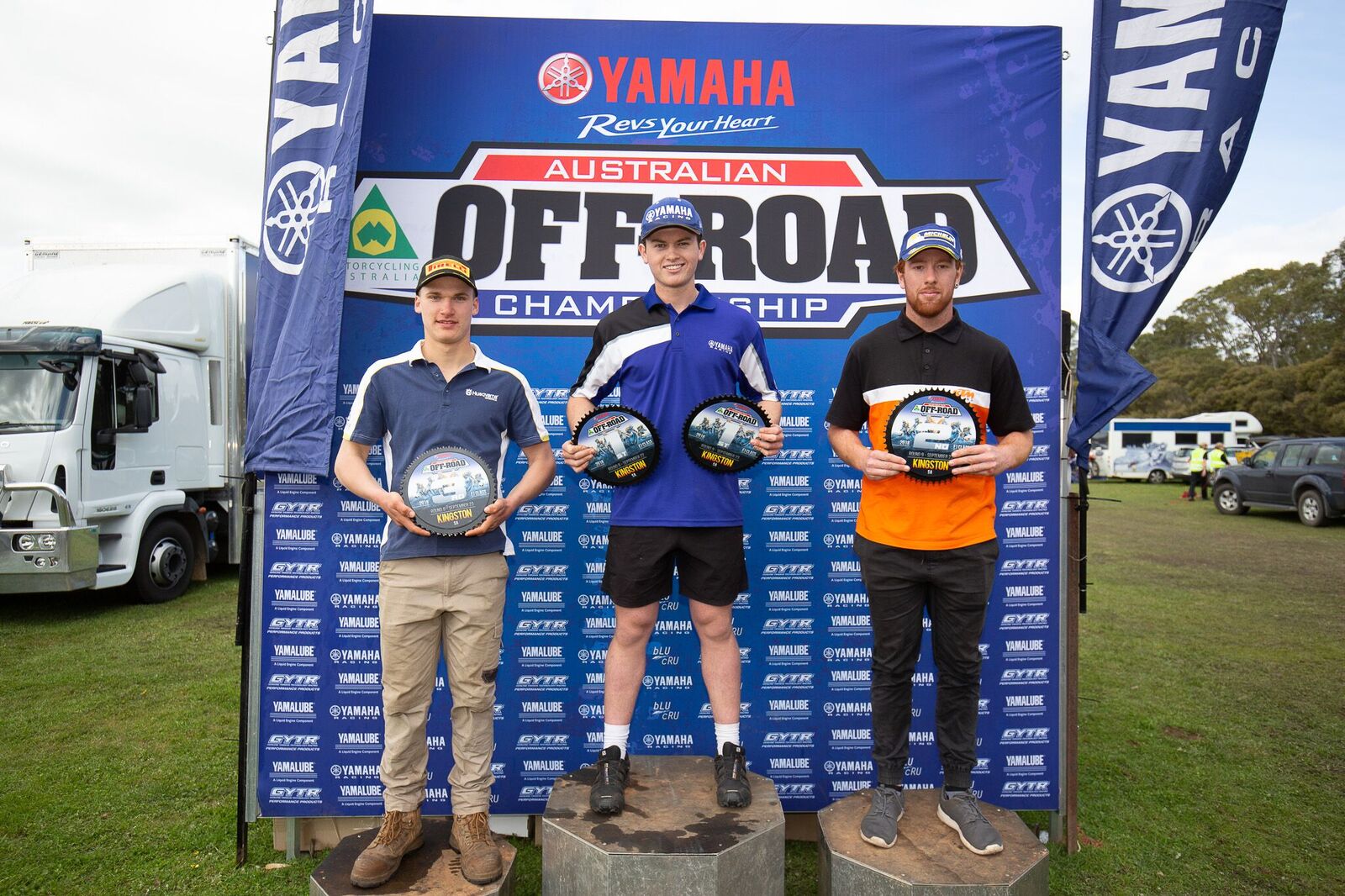