In typical desert conditions, Daniel Milner showed his class aboard his KTM to set the quickest time in today’s Yamaha Australian Off-Road Championship (AORC) prologue at Broken Hill, NSW. Milner was first out on the track and registered a time of 3:05.796 over the 2.1km course, sending a message to the field that he is on this weekend.

Milner’s teammate and last season E3 Champion Lyndon Snodgrass had his best return of the 2018 season, finishing just 0.002s off Milner. Snodgrass leads the way for the E2 class heading into tomorrow first ever four-hour AORC desert cross country with his time of 3:05.798. 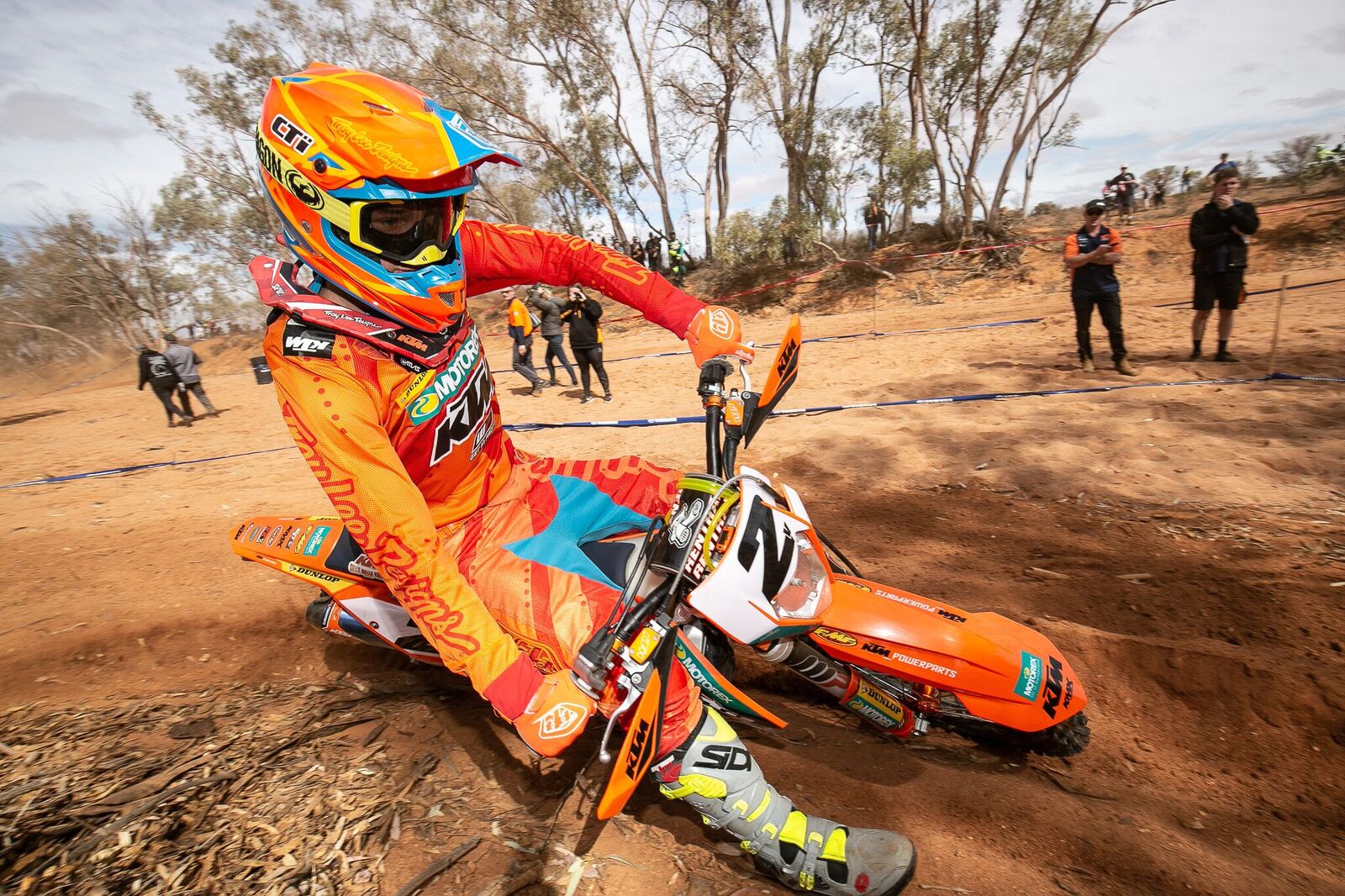 Mr consistent, Josh Green on his Yamaha was once again battling it out up the front end of the field with a lap of 3:06.791. Just 0.995s off his fellow E2 rival Snodgrass.

Leading the way for the smaller E1 machines was Luke Styke aboard his Yamaha, registering the fourth fastest time of the prologue with a 3:06.734. 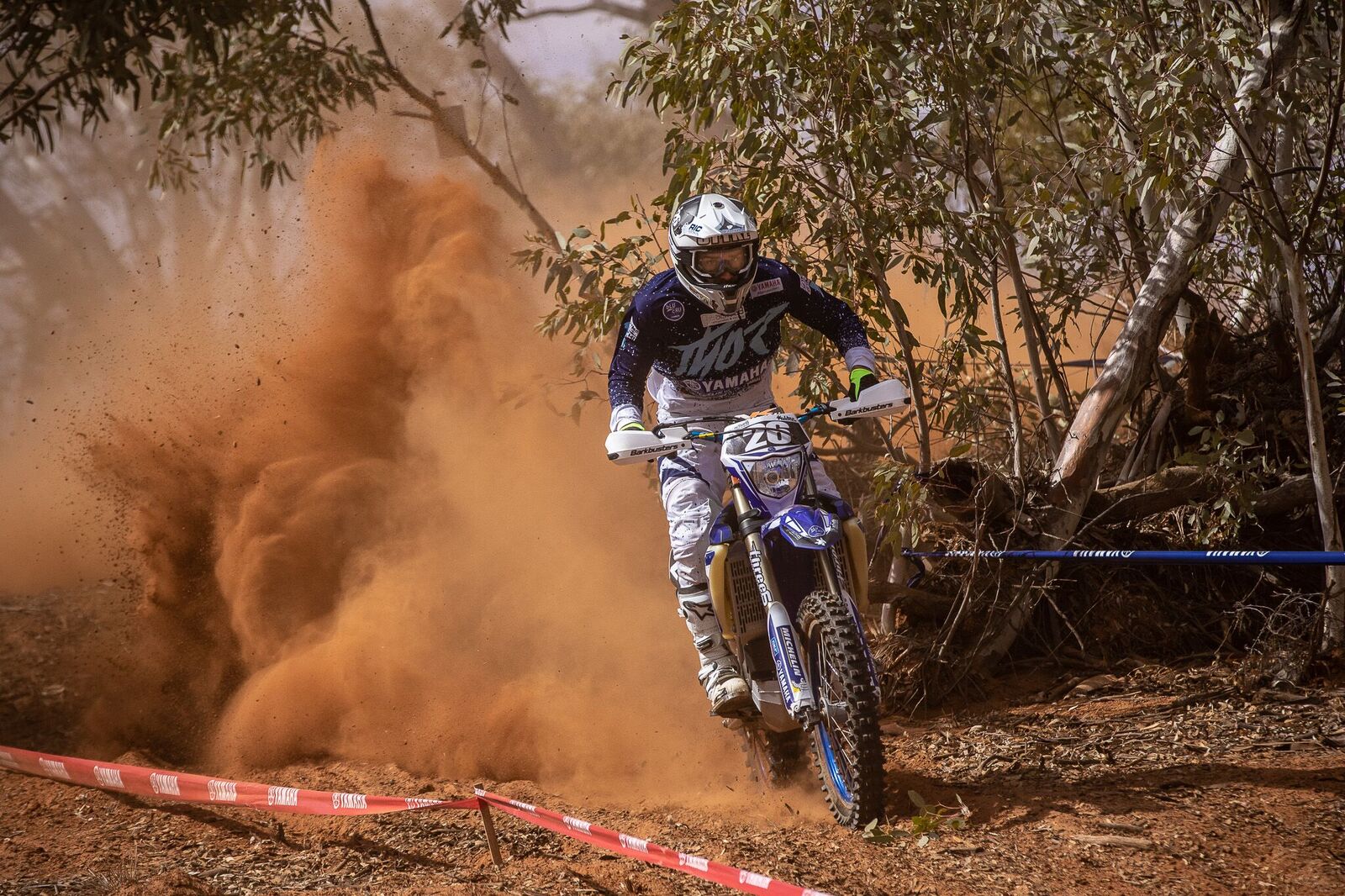 Rounding out the top five in an impressive display was privateer Riley Graham, clocking at 3:08.438, and just behind Graham was the man sitting second in the E3 title chase Lachlan Stanford, after he crossed the line on his Husqvarna in a time of 3:08.567.

In what is becoming a common theme in the EJ class this season at AORC, Michael Driscoll was once again the quick EJ rider, stopping the clock at 3:10.000.

On his new weapon, Andrew Wilksch put his new Sherco 500 into eighth position on his first ride, collecting a 3:12.551. With more time on the new bike, Wilksch could be a real threat in the E3 class.

A sight not seen at this year’s AORC, but it wasn’t Daniel Sanders day at Broken Hill, usually seen battling at the front, the Husqvarna pilot clocked a time of 3:13.008. Sanders will be looking to bounce back in tomorrow’s cross country, don’t ride the Husky rider off just yet, cast your minds back to the last desert race…

Rounding out the top ten in the Prologue was Wil Ruprecht with a 3:13.845, the Yamaha rider will be another one to look for as one of the fitter riders in the field, the four-hour format will play into his hands.

Emelie Karlsson has continued her form that saw her take out the last round, setting the quickest time in the Womens class at todays prologue, a 3:43.225. The battle between Karlsson and Jessica Gardiner is set to be epic over four-hours tomorrow, Gardiner finished her prologue just over three seconds behind Karlsson.

In tough sandy conditions Peter Rudd got one back on Veterans championship leader Richard Chibnall, with Rudd clocking the best time by three seconds. Rudd registered a 3:32.283 whilst Chibnall clocked a 3:35.526, tomorrow will be interesting to see if Chibnall can find those three seconds back on Rudd.

The master’s class was all about Craig Treasure, sending a real message to his competitors that the enjoy the desert conditions, clocking a 4:01.336. Treasure holds a gap of just over 11 seconds to his nearest competitor David Salt.

Today’s prologue dictates starting order for tomorrow’s four-hour desert cross-country, Milner will lead the field off in the staggered start. The racing commences at 9:30am as the riders tackle the 28km loop here at Broken Hill, NSW.