DSR Motul Pirelli Sherco Off–Road Team’s Derek Grundy has experienced a phenomenal season so far within Yamaha Australian-Off-Road Championship (AORC) Masters class. Not only is Grundy leading his class standings, the Tasmanian is also the Assistant Team Manger for his outfit. In what could be his last year of racing competitively, Grundy hopes to attain that elusive championship win.

Grundy competes within the Masters class in which riders must be 45 years or older. Currently, the Sherco rider is 43 points ahead of his nearest AORC challenger, Craig Treasure (Husqvarna). So far Grundy has won every race for his class in 2017, and is on track to meet his objective.

“I’m very happy with my performance so far this year,” Grundy said. “Unfortunately it was going well for me as well last year until I broke my collarbone and I missed out on the title. In 2017, I’m hoping to redeem myself and win the AORC Masters championship. This could be my last year racing competitively, so I’m aiming to make this one count!

“The last outing at Miva (QLD) played out exceptionally well for me,” Grundy stated. “Despite a little niggling wrist injury that I picked up late on the Saturday, I still managed to have a very solid weekend and won both my respective races.”

“It’s not always easy to juggle my Assistant Team Manager duties alongside my racing as we are a small team,” Grundy said. “I’m often refereed to as the ‘Team Captain’ and I try to provide encouragement, motivation and advice to our other riders, whenever I can. I would like to continue in this role long-term.

“There’s no doubt that we have that we have very capable riders, however they often ask questions in regards to bike setup and riding in general. It can be as simple as a pat on the back and a little motivation, its great to be able to offer that assistance.”

Fellow team mate Wilksch was not able to compete back at Miva due to a injury, but is ready to go for the upcoming Renmark Rounds.

“Andy is in really good knick again after a significant tear in his quad, he is basically back to 100 precent. His fitness and treatment have helped him recover tremendously. We feel he could also be in for a good result this weekend.

“I’m aiming to secure another clean sweep this weekend,” According to Grundy. “If I can take another double victory, I think it can go a long way to helping me win the title. However, there’s also the conservative side of you that tells you to take the points.”

The DSR Motul Pirelli Sherco Off-Road Team sees a change in riders for this weekends’ racing, with Nic Tomlinson being replaced by Justin Carafa.

“Justin will now be riding with us this weekend at Renmark, as Nic Tomlinson has gone in a different direction,” Grundy said. “Justin has raced with us in the past and he will likely remain with us for the rest of the season. He is always at the pointy end and will likely ride a 300 SEF-R this weekend.”

Grundy expects positive results from his team this weekend; “We think Kate will be somewhere near the front and Andy can also be on the podium. Can’t wait for this weekend’s rounds at Renmark, SA!” 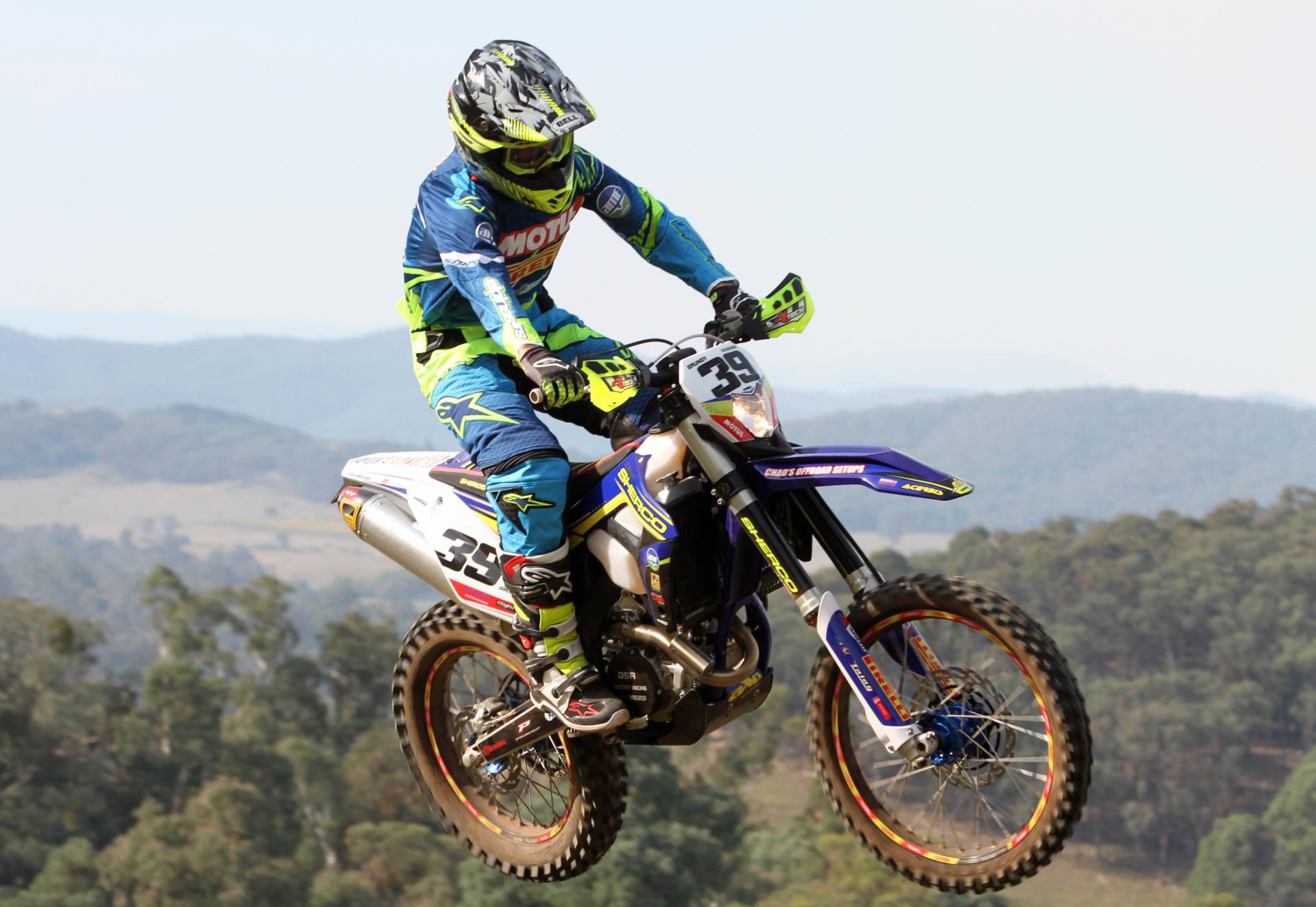 Images courtesy of Sherco: Derek Grundy and his Sherco

Don’t forget to apply for your press accreditation for Rounds 7 & 8 at Renmark by clicking here.