“We’re thrilled to have Sophie with us at Sherco,” said Motul Pirelli Sherco Team manager Derek Grundy. “The potential for Sophie to win the Australian Championship is huge.”

Coldicutt placed third in the 2017 Australian Off-Road Championship, missing out on second place by just 1 series point. The determined racer was on the podium at every single round and now that she has the backing of the Motul Pirelli Sherco Team, the sky is the limit.

“Sophie has been knocking on the door of a championship for a little while now,” Grundy continued. “She’s been on the podium and given the right equipment and mentoring and bit of extra help from our Team, she can go right to the top. She has had a really good pre-season off the bike and is stronger and fitter than I have seen her. Sophie is a very competitive person by nature and that is part of the reason we got her on board. Sophie’s best racing is yet to come. Sophie could be the future face of women’s off-road racing in Australia.”

Coldicutt will enter the 2018 Australian Off-Road Championship with a new Sherco 250 SE-R and a mindset for victory.

“I’m so excited to be racing with the Motul Pirelli Sherco Team,” said Coldicutt.  “I have never had the support that a good Team can provide so I expect big things of myself this year. The bike is amazing, and I am more comfortable and feeling faster on it in most areas of my riding. I did some training and riding with Matthew Phillips over the summer off-season and I feel fit and ready to race. Matthew was able to help with some aspects of my racing, so I am ready to put it to the test.”

Coldicutt is testing with the Motul Pirelli Sherco Team and Chad’s Off-Road Set-ups this week in preparation for round one of the 2018 Australian Off-Road Champion in Gympie, Queensland, March 10-11.
For more information on Sherco Australia, visit www.sherco.com.au or to follow the progress of the Motul Pirelli Sherco Off-Road Team, visitwww.facebook.com/shercomotorcyclesaustralia 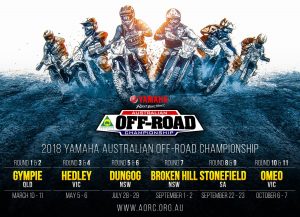