The opening round of the Championnat de France d’enduro last weekend at Le Luc in southern eastern of France saw Jess Gardiner taking a clean sweep on both days to ignite her championship in the best way possible.

On the first day of competition was quite difficult for Gardiner in some of the tests as she had to try and pass some of the other girls on tracks which were quite tight, which made it pretty “challenging” according to the 24-year-old who now has teamed up with the Rider Camp Yamaha team for the 2017 season.

“It’s a great way to kick start the championship off with a win,” said Gardiner at the conclusion of day one.

“We’ll just have to keep on top of everything and keep pushing for another day like we had today as the competition is really strong here in the French championship,” added Gardiner who topped the time sheets in three out of the six heats.

The second day was pretty much the same as the first, but this time Gardiner’s overall winning margin was trimmed to 19.517sec.

Gardiner expressed that the opening round of the Championnat de France d’enduro was probably one of the rockiest races she has raced, in her life, took out the second day with a time of 29min00.600 and took out four of the six heats with her best time coming in the in the fourth heat with a time of 4min19.775.

Gardiner’s win on Sunday didn’t come easy, as she had a bit of bad luck by connecting with other riders which brought her unstuck on a dry and dusty track, which made the trails quite challenging as well.

“Overall I’m very happy about the weekend considering the challenges I had against me,” beamed Gardiner, who also took her first ever World EnduroGP podium Le Luc in the 2012 in the same exact region.

“Obviously I was one of the main competitors, which always adds a bit of pressure. However the pressure I believe makes you race just that little bit better,” explained Gardiner who will head into the second round with a six point championship lead.

I can’t talk highly enough about the Yamaha WR250F machine. The bike along with the Michelin tyres were just faultless all weekend and lived up to the challenges.”

Gardiner, who has previously competed in a handful of French Enduro rounds was once again impressed with the overall championship.

“I believe the French Championship is a really good series to race in. It’s probably one of the best national championships in the world. Their level of professionalism from everything from the racing, paddock layout even down to the social media side of things is totally amazing.”

The next round of the Championnat de France d’enduro will take place in Gace´ on 13-14 May. Gardiner will now turn her attention to this weekend’s opening round the Women’s EnduroGP series which be held in Puerto Lumbreras, Spain.

Words and Photos from Jess Gardiner 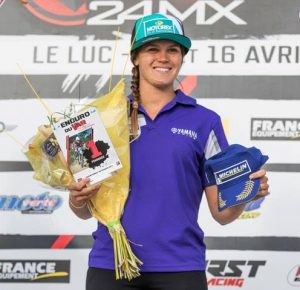 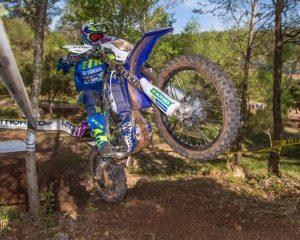