It was a brilliant start to Round 10 at Kyogle of the 2017 Yamaha Australian Off-Road Championship (AORC), with a daunting challenge ahead for competitors; tensions were high to see who would end up on top. Ruprecht, Milner, Stanford and Driscoll won the Enduro races for their respective classes.

E1
Bringing it home for E1 was Active8 Yamaha Yamalube Team’s Wil Ruprecht to solidify another fine weekend for himself and his team. Ruprecht has come under pressure from Snap Fitness Yamaha Team’s Scott Keegan in previous rounds, however Ruprecht has risen to the pressure and delivered a clean sweep at Kyogle. Ruprect managed to outpace Keegan in all of the tests towards an overall time of 53:46.953. In second position was Keegan on his Yamaha machine. After suffering a retirement on Saturday, Keegan managed to score solid points for his team. Keegan’s total elapsed time was a 54:59.367, to finish 72 seconds behind his title rival Ruprecht. The final podium position belonged to Jack ‘simmering’ Simpson on his KTM. Simpson has finished on the podium both days to mark a successful return, after missing the last two rounds at Renmark. Simpson took 55:56:454 to complete the Enduro course, close to a minute behind behind Keegan.

Ruprecht described his love for the Enduro format; “We started off very strong on both days and came out fighting out the blocks. There were a few mistakes here and there but I was very comfortable on the bike. The Enduro format is by far my favourite, simply due to the lengthy track time.”

E2
The Daniel Milner show continued today, as the KTM Enduro rider cleaned up within the E2 class. Milner laid down the gauntlet from the very beginning, as he was well in front after the first test. From then on it was a Milner master class with a total time of 52:46.953. Milner finished on top of the timesheets for every test. Up next for E2 was the ‘Green Machine’ Josh Green of the Active8 Yamaha Yamalube Team. Green spent the entire duration of the day within second place. Green’s accumulated Enduro time was a 53:57.707, 71 seconds behind Milner. Green stated that he was a huge fan of the Kyogle track and its technical nature, but Milner was simply too strong this weekend. Finishing in third place once again was Riley Graham on his Yamaha, with a combined total lap time of 54:48.036. Graham was particularly strong in the third test with a strong lap time that was only beaten by the winner Milner.

Milner described the victories; “It was a great weekend, the tests were very technical. It was great to get out there on such a light bike and it was unreal to throw it around in the technical and tight sections. Several of the tests were the best I’ve ever ridden! There were very little mistakes and overall it was a solid weekend. To win at Hattah and now here once again at AORC is a great effort.”

E3
The E3 Enduro spoils went to Lachy Stanford of the Husqvarna Enduro Team. Stanford has raced on the Kyogle tracks on plenty of occasions as a local to the area. Stanford’s time in the first test was particularly strong and help to set him up for a commanding win. Stanford managed to snatch victory from KTM Enduro Team’s Lyndon Snodgrass. Stanford only took 53:41.862 to complete the course. Snodgrass posted a total time of 54:49.377, the difference between the two being over a minute. Up next was Jesse Lawton, for a very popular podium position with his time of 53:41.862. Lawton battled with Tom Mason for the duration of the Enduro and managed to come out on top on this occasion.

Stanford shared his thoughts; “I think the Enduro format is my strongest. The technical track with a single trial and lots of off camber sections really suits my style. You also have to avoid making mistakes and we definitely stayed tidy throughout the whole weekend. Its was great to have the edge on Lyndon today and the last rounds at Omeo will be on grass track as well so that suits me just fine!

Transmoto EJ:
The Transmoto EJ provided the closest battle for the lead within the Senior classes. Yamaha rider and former Motocross rider Michael Driscoll managed to turn the tables on Husqvarna rider Fraser Higlett for the win. Driscoll managed to complete the Enduro with a time of 55:26.110. Despite leading in the early tests, Higlett fell behind in the mid stages of the race. Higlett finished a further 19 seconds behind Driscoll with his time of 55:45.937. Nic Tomlinson finished in the final podium position, his time was a 56:18.174.

It’s been wall-to-wall, action packed rounds for the Yamaha AORC in 2017. With so many stories and triumphs so far, its sure to be a thrilling finish for the Championship at Omeo, VIC. Can’t wait to see what lies in store. 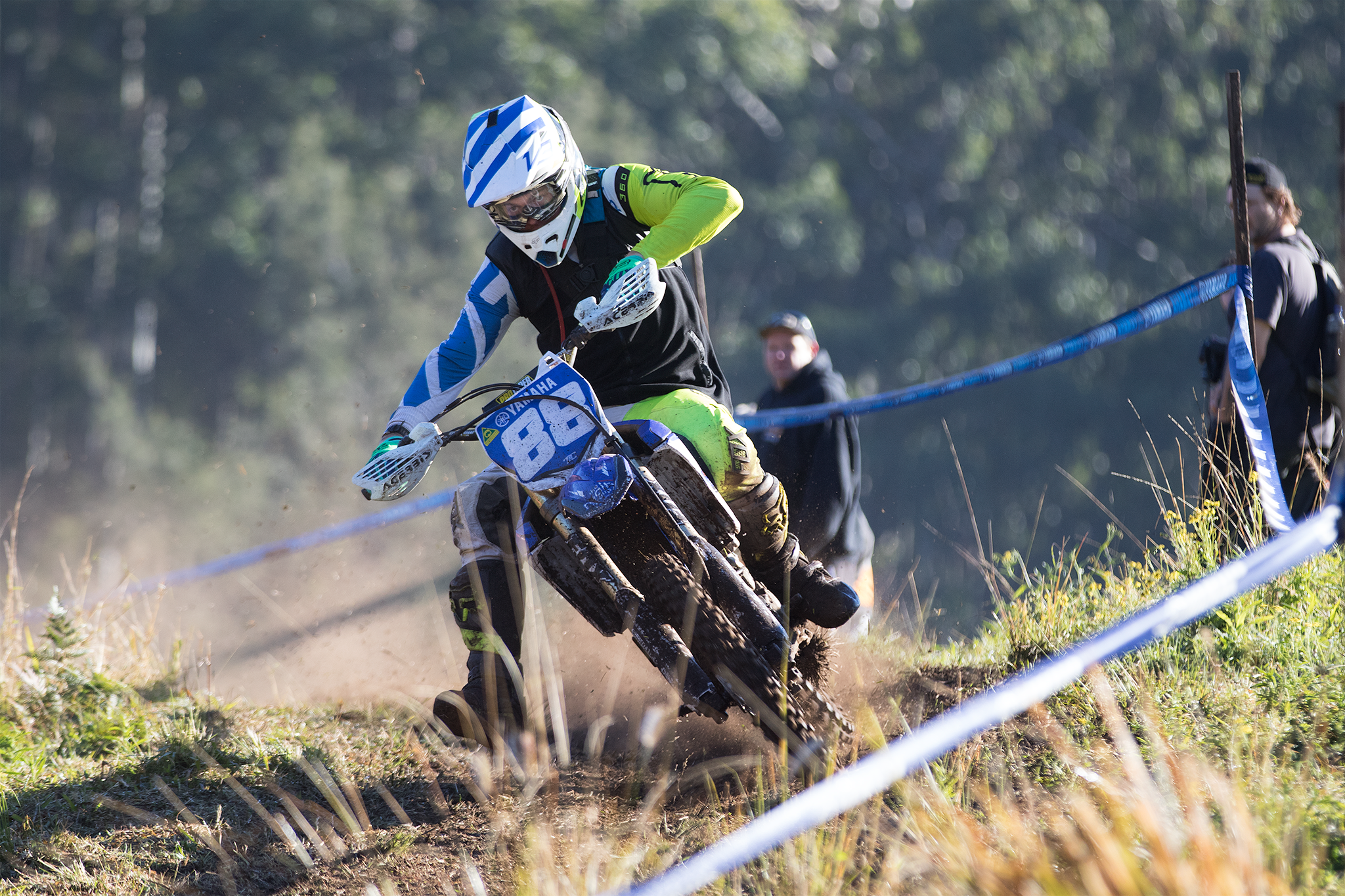