This World Championship winning team will line up against the world’s best women’s international teams to defend a title previously claimed four times by the Australians, and will now be chasing a historic fifth win in a row.

Jess Gardiner who is now staring down the barrel of wrapping up her first European Enduro Championship, is pumped for this year’s ISDE; “I have been spending a bit of time in France this year competing throughout Europe, so I am really looking forward to compete in my adopted country. I’m super excited to be reunited with our Australian girls team, whom are all on separate continents right now. Looking forward to seeing all the Australian crew and doing our best to secure our fifth world championship title together!” Gardiner exclaimed.

Tayla Jones, who has been cleaning up in the Kenda Full Gas series in the United States this year and leading the Women’s Pro Overall Standings, also cannot wait to defend the title; “I can’t wait to head over to France to try make it out fifth world title in a row. I am feeling really good on the bike and I know Jess and Jemma are also killing it, so it’s going to be a good race. I’ve seen several pictures of the tracks that have started being set up, and they look awesome, I’m excited to get there and start racing,” Jones shared.

Jemma Wilson, after taking out the Women’s Yamaha AORC title in Omeo (VIC) is in ripping form and ready to compete at the ISDE; “I have stayed in Australia all this season and I am really looking forward to heading over to France. Tayla and Jess have been phenomenal in America and Europe all year, and I have enjoyed the AORC season. We all appear to be ready to go for five in a row! Thanks to Yamaha and Motorcycling Australia for making it possible!” Wilson finished. 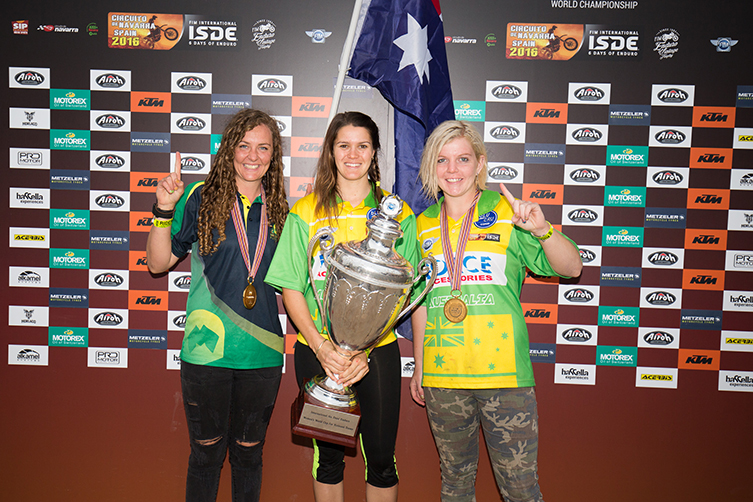 For more information and to stay up to date with everything happening over the week of 2017 ISDE this From August 28th to September 2nd, head to AORC.org.au, like the AORC and MA Facebook pages or follow the @aorc and @motorcyclingaustralia on Instagram.